Nominations open until Oct. 31 for Weyburn residents who have contributed to our community. Click Here for More Information

To control and maintain Dutch Elm Disease. Find out when your area will be sprayed. Click Here For More Information

The Richardson Pioneer Weyburn Red Wings training camp begins this weekend at Crescent Point Place and Nick Nielsen, the voice of the Wings, is excited about what the weekend will showcase.

“I'm looking forward to seeing this team turn a bit of a corner towards some new horizons and better horizons this year," he said.

"Of course, last year the Red Wings had a lot of issues and, you know, a lot of injuries and stuff like that. It put them in last place at the end of the season, but their nucleus of guys on this team has really grown. We've got a lot of new additions that were really, really excited to see what it's going to be like."

"I think we're probably going to have one of the best six defensemen in the league on our team this year and if you want to come to get a good look at it, come to camp. This weekend is going to be a lot of fun."

Friday features off-ice and fitness training for the players, so you won’t see too many of them on the ice. Saturday and Sunday will be filled with ample ice time and an open invitation for the public to come out and watch, Nielsen explains, “Saturday and Sunday are going to be chocked full of different games between our teams here, some intra-squad games. We've got five teams that are all going to be playing. Our full schedule is going to be posted on our Facebook, Twitter, and Instagram, so if you want to take a look at the full schedule for Saturday and Sunday, it's going to be posted up there. Their game starts on Saturday as early as 9:00 a.m. and the last one on the schedule on Saturday is 7:00 p.m. Sunday, we'll have three more Inter squad games before the Red vs White Game.”

Nielson said they will be, however, short a man.

"One of our guys who we traded for from Camrose Kodiaks, Matthew Gauthier, right now is getting set for National Lacrosse Junior Championships with the Edmonton Minors," he noted. "So he's missing camp, but he's doing it for the right reasons and he's in a three-game series here. He's been playing really, really well. He led his league in playoff scoring by about 10 points, so we're looking forward to getting him here, but right now we're cheering him on from afar."

The Red Wings are honouring one of their past players, Eric Calibaba on Sunday night shares Nielsen, “This year we are naming the Red vs White Game to the Eric Calibaba Cup in honor of Eric Calibaba, a local guy out of Radville who was an assistant captain here for the Red Wings in the late 2000s. Unfortunately, he was taken from us a little too early in a vehicle accident. We're really excited to be honouring his memory and his legacy around this team. We've seen a lot of positive feedback since we announced that earlier this week.” 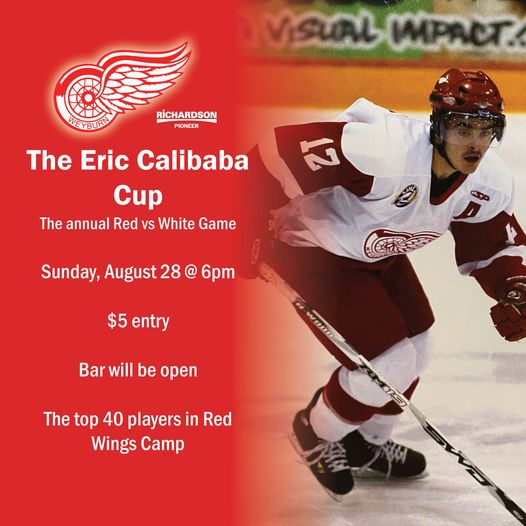 Many Canadian doctors struggle with burnout, depression and anxiety: survey

[PHOTOS]: It's feeling (and looking) a lot like autumn in Weyburn!

Busy weekend coming up for the Red Wings

Families of missing and murdered Indigenous women seek change ahead of Oct. 4 vigils

Photographer rides out Ian to capture the storm for others

Legion Wings from 4 pm until 8 pm